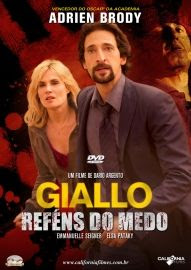 
I went to Frightfest this past weekend, and would definitely like to chime in all the madness concerning Argento’s latest:
A few things before I get into the film. I spoke with Alan Jones throughout the entire festival and the following was stated by him:
1) He hates the film and feels its Argento’s worst film
2) Argento himself loathes the film
3) The film was taken off Argento’s hands and reedited three times
4) Argento and Brody are sueing the studio as allegedly neither of them have been paid for it.
Ok, now on to the film. As the film began, for the first 20 minutes nobody neither laughed nor chuckled at GIALLO. It was proper horror filmmaking that was done quite well.
The problem came however, when some very small comedic tones jumped into the picture about 30 minutes in. After that, the audience got the notion to laugh at anything and everything that they could remotely find. The audience soon found themselves thinking that they were better than the film, which really should not be the case. This actually became quite annoying, as every other scene was met with irritating laughter, pulling you out of the film each time.
This is the problem sometimes with watching films with audiences. As many of you know, watching some Argento’s earlier classics with an audience has quite often been a very frustrating experience, with the audience receiving the film’s with needless laughter and snickering. This also was the case with Argento’s newest film, many people expected/wanted to laugh at it, so they found any moment in the film to do so.Although some moments did indeed call for an enjoyable chuckle (some of the dialogue) , it was in no way as funny as the audience made it out to be. Point in example, the final shot of the film ends in a very dramatic freeze frame, an Argento motif you could say. Yet for some illogical reason the audience burst into laughter. Does this make any sense?
The film has been shown publicly only two times, Frightfest and Edinburgh. Both times have been with packed out audiences literally waiting to crucify the film. You should have heard some of the comments made prior to the screening, they were just waiting to bash it to pieces.
Interestingly enough, Alan Jones told me that both Tarantino and Eli Roth saw the film at Tarantino’s house and really liked it. It seems they were able watch the film by themselves, without a scathing crowd, probably why they really enjoyed it.
Some quick thoughts on the film itself:
All in all, the film itself is actually a well-made thriller. Although it’s not in the same realm of Argento’s previous masterpieces, GIALLO is nicely made minor Italian thriller that really should be seen. Hopefully, I'll be able to enjoy it more so once it arrives on DVD/Blu.One of the real disappointments I did find with the film though, was the killer’s presentation. Although he had wicked back story concerning why he was called Yellow, visually he wasn’t presented very well. I was never really intrigued or scared by the killer’s presence.I really don’t think Argento has suffered from a bad film here, just a bad audience.
Arif Khan (avmaniacs.net)
Publié par Guillaume à 09:21